There are many reasons why Lyme blood tests will come back negative in the real presence of lyme disease, several of which are discussed at Melissa Kaplan’s excellent discussion. Dr. Bleiweiss explained this to me, with the observation that worst of his patients never tested positive. Usually this has to do with the nature of the blood test itself. And below are a couple of discussions that begin to give you some visual.

In the case of the severe lyme infection, the quantity of infecting spirochetes is so high, there are not enough antibodies to go around, thus leaving none of them available to be tested for in the common blood tests. 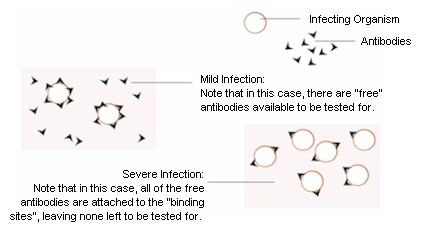 Overwhelmed antibodies in a severe infection

A second type of blood test (called PCR) is accurate—in a sense. This test seeks to find the specific DNA of the lyme organism. A positive result in this test is assuredly a confirmation that there is the presence of the lyme spirochete. However, the problem with this test is the very the nature of it (and it’s expensive, too): The test is like scooping a cup into a swimming pool, and hoping to come up with the single cotton ball that’s floating around in the pool. There’s just too little organism to be found.

Our own US Center for Disease Control states plainly that the blood tests are too inaccurate, and the diagnosis for lyme is to be “clinical” — by the symptoms. How inaccurate? Well, about the same as a coin flip, with about 50% of the tests being false negative, and 50% false positive.

Bottom line? And the reason for writing all of this — don’t rely on blood tests alone. Understand the danger if your doc is trying to tell you that since you have negative blood tests, you categorically “have no lyme.”

The correct lyme diagnosis is a clinical one.